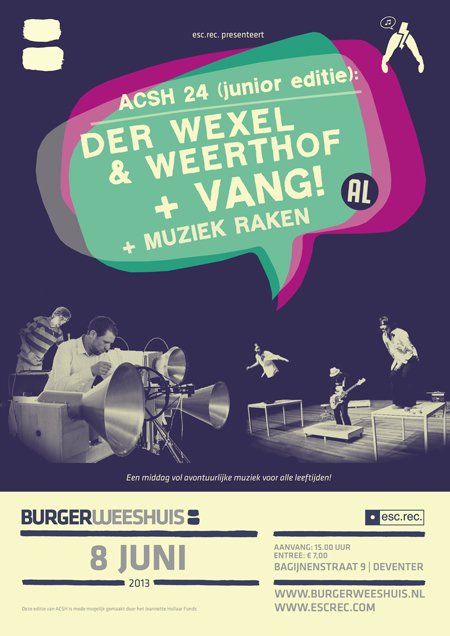 After a long line of Ass-crack Stage-hacks (ACSH) in Havenkwartier Deventer, this is the first edition taking place in Burgerweeshuis. And it’s another junior edition! The junior editions of ACSH are specifically targeting an audience of both children and adults.

Der Wexel & Weerthof
Wessel ‘Der Wexel‘ Westerveld creates sound producing mechanical installations. In this edition of ACSH he plays his Intonarumori and Sound By Sculpture installation. The Intonarumori are reconstructions of the soundmachines by futurist Luigi Russolo and have names like Ululatore (howler), Ronzatore (buzzer) en Crepitatore (crackler). They are reconstructed using photographs, sketches, descriptions and old sound clips. The original instruments were lost in World War II. It’s a special treat to be able to listen to these machines again, plus they look amazing!

Michiel van de Weerthof also develops his own instruments. Hence we can now also listen to the ‘Pompenorgel’ (a combination of organ pipes and air mattress pumps), modified Vuvuzela and other homebrewn objects. Weerthof feels perfectly at home in the abstract sound world of Der Wexel, and worked with him before. But he also excels in producing soundtracks and catchy pop songs. A Weerthof EP release on Esc.rec. is imminent.

Vang!
The trio Vang! consists of Bruno Ferro Xavier da Silva, Marije Nie and Janne Eraker. Bruno Ferro Xavier da Silva is a gifted bass player, who also fronted the band Stöma in the previous ACSH. He is devoted to his bass guitar and uses it in combination with bow, sampling and various effects to elicit the weirdest of sounds and delicious grooves. Marije Nie and Janne Eraker are both experienced tap dancers, who can rightfully call their feet fully fledged musical instruments. The three individual members of this trio all have an impressive track record and surface in countless really cool projects. As the Vang! trio they present a – both musically and visually – dazzling tapconcert.

Muziek raken
We kick off this special ACSH edition with a series of short performances by a number of orchestra’s formed by primary school pupils from the Sine Limite verrijkingsgroep. These performances are the result of ‘Muziek raken’, a project developed for these pupils by Marloes Bloemenkamp and myself.

This edition of ACSH is supported by Jeannette Hollaar Fund. 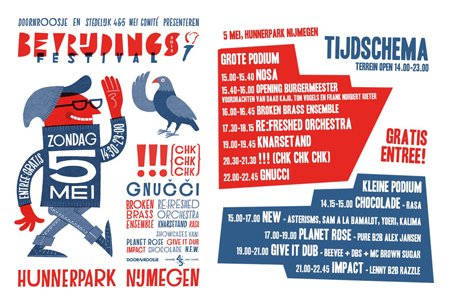 END_OF_DOCUMENT_TOKEN_TO_BE_REPLACED

This adventurous debut is released on the dutch Esc.Rec. label – a label that specializes in releasing music that defies any categorisation