Elise van der Linden was kind enough to shoot some video at the previous ass-crack stage-hack in Havenkwartier Deventer. So here is a fragment of the concert by Gareth Davis (bass clarinet), Romke Kleefstra (guitar & effects) and Jan Kleefstra (Frisian poetry).

The audio was recorded by the videocamera. A better audio registration of the complete concert can be found online soon.

The concert of Bela Emerson on the same night was also taped by Elise. Maybe online soon.

Arno Peeters is a musician/artist/sound engineer working from Utrecht, Holland. Starting from the 80’s techno scene (with Voltage Control, credited to release the very first ‘Acid’ record in the Netherlands), he soon ran into the limitations of the genre and pushed some borders releasing ‘Fuzzy Logic’ on Djax-Up-Beats, and the even more experimental ‘Aeroson’ soundscape on the legendary Mille Plateaux label. From there, Arno’s focus has shifted from recording projects to sounddesign and installation projects – partnering with installation artist Iris Honderdos on numerous global ‘social art’ projects.

Arno Peeters also contributed a remix to the POKE 20 project, released by esc.rec. (listen to it here).

Esc.rec. just launched a new concept: The Diamond Exchange. Two (or more) passionate music fans take turns in playing their personal favorites for each other, in front of an audience.

Participants are selected (by esc.rec.) to ensure a certain level of musical compatibility and to stimulate chemistry, which can be equally interesting for the participants and the audience. At best, you witness an exciting, musical conversation between two connoisseurs. Depending on the selected participants, that conversation may trigger an audience to listen, dance, or both. No limits, anything goes.

The first edition is set for April 23rd in Het Burgerweeshuis and features Bart Folmer (Radion) and Harco Rutgers (Cette Truc), who also just so happen to be esc.rec.’s founding fathers way back in 2004. You have to pay 6 euro to get in, but then you also get to enjoy the 5 year anniversary of Deventer Dub Sessions with San Soda and Tom Trago. 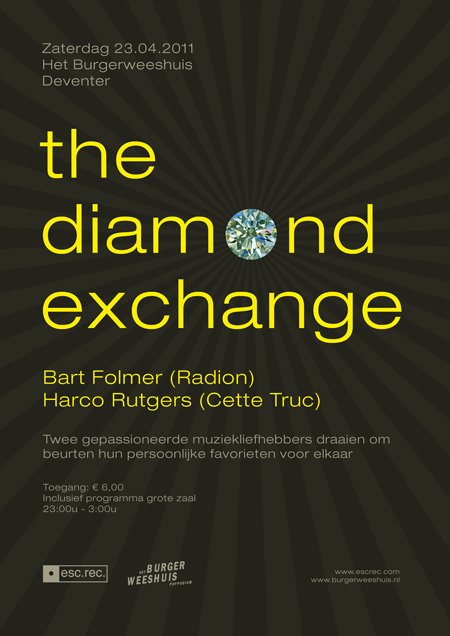 You have to pay 6 euro to get in, but then you also get to enjoy the 5 year anniversary of Deventer Dub Sessions with San Soda and Tom Trago.