Gitbas Jodel, the extraordinary guitar player of De Bronstgieters is putting a lot of archived material on his YouTube channel of that other obscure band he played in: Hanzasport. In those days I was officially proclaimed their biggest fan by Hanzasport themselves. I even used to wear hand painted Hanzasport fan shirts to their gigs… really. Glad to see Hanzasport has found it’s way to the internet now!

Klub Dub in Burgerweeshuis next Saturday 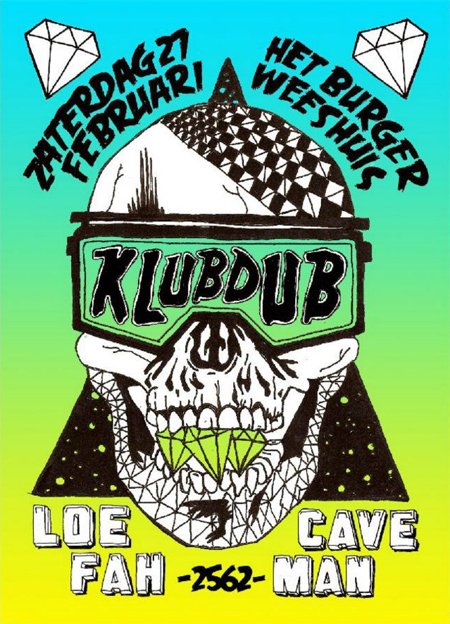 This Saturday we’ll be dubstepping at the second edition of Klub Dub in Het Burgerweeshuis, Deventer. With another grand line-up: Loefah (co-founder of the whole dubstep genre, back when it was still called grime), 2562 (one of my personal dubstep favorites since his debut album ‘Aerial’) and Cavemen (dubstep project of local heroes Dries Bijlsma and Rob Peters). 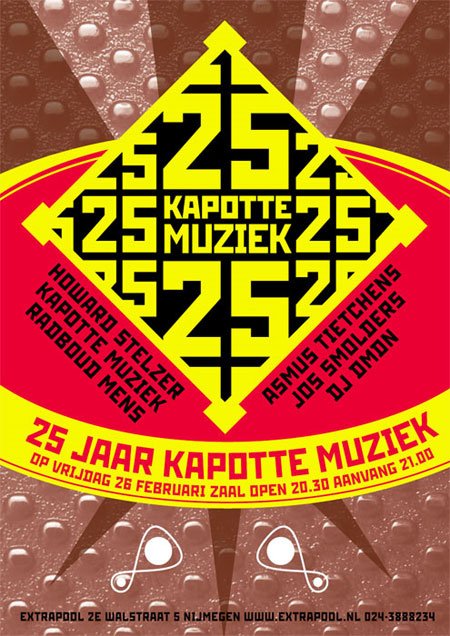 On October 1st 1984 the very first piece of music by Kapotte Muziek appeared on a compilation cassette. And now, 25 years later, Kapotte Muziek still exists, with a sheer endless list of releases on cassette, vinyl, CD and MP3. Untill 1993 Kapotte Muziek was mainly Frans de Waard, but after that it evolved in more of a live thing with Peter Duimelinks and Roel Meelkop. Since 2003 the Kapotte Muziek name is used by this trio only. Kapotte Muziek played everywhere in Europe, Russia, two long tours in the USA and one in Japan, playing as both Kapotte Muziek and as Goem, their techno music alter ego. They were remixed by Troum, Asmus Tietchens, Peter Rehberg, Illusion Of Safety and many others. A 25 years of existence well worth celebrating!

And now we can, because Extrapool is hosting an event next Friday to do just that. Featuring an impressive line-up (with a lot of artists who released some of their music through esc.rec.): Howard Stelzer (USA), Radboud Mens (NL), Asmus Tietchens (D), Jos Smolders (NL), Kapotte Muziek (NL) and DJ DMDN (NL).

Also check this blog for plenty of history lessons and free downloads.

Bram van den Oever (Gluid), made the soundtrack for theater play/ installation ‘De Gedaanteverwisseling’. This famous story by Kafka is theater group Noortje Licht‘s new pray… read all about it.

Yoshimi! remixes Monokino and other news

Yoshimi!: “It has some serious shredding and demonic voices in it! I believe the band was less amused, but like we say in Holland ‘Ach…’.” You can listen to it here. I really don’t see why Monokino would not be amused…

Further news about Yoshimi! mentions he has some all new transformed Yoshimi! 2.0(?) gigs lined up for which he has written some Dutch(!) songs. Should be interesting. And there are T-shirts. Check it all out in the news section overhere.