Friday, September 18: The 8th edition of ass-crack stage-hack is comprised of solo and duo performances by Jozef van Wissem and James Blackshaw, preceded by another exclusive three course diner by Jean Klare. This time the ass-crack stage-hack quite literally hacks a stage, because at the same time the video manifestation ‘Prognosis for the Future‘ takes place in Havenkwartier Deventer. 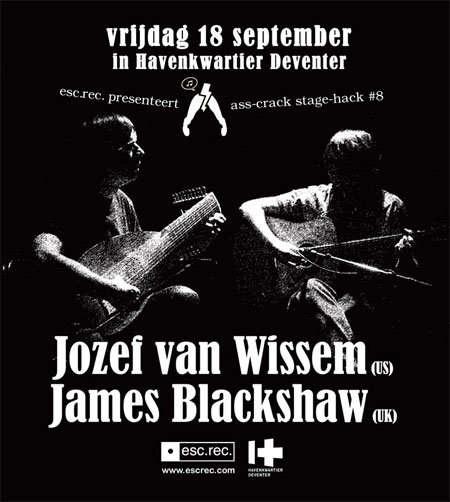 Jozef van Wissem (US)
Jozef van Wissem is a Dutch minimalist composer and lute player. He is renowned for his unusual approach of the Renaissance and Baroque lute, probably the most unlikely instruments in the world of contemporary music. Van Wissem wrote out mirror images of hundreds of classical lute tablature pieces, copying them out from the bottom right to the top left corner. To these inversions he added new themes, accents and rhythms. He then applied the ‘cut up’ technique of writer William Burroughs and cut, shifted, mixed and pasted the parts together to create new works. One critic has compared this work to that of German painter Georg Baselitz, who paints upside down.

Van Wissem has accomplished the strange feat of bridging the idiom of seventeenth century lute literature and twenty-first century contemporary music Although he uses subtle electronic sound manipulation, he has largely stayed faithful to the particular timbre, resonance and playing technique of the lute.

Together with James Blackshaw Jozef van Wissem forms the duo Brethren of the Free Spirit.

James Blackshaw (UK)
Initially inspired by the guitarists of the 60’s Takoma label to teach himself fingerpicking, James Blackshaw writes long-form pieces primarily for solo 12-string guitar and piano that are heavily influenced by minimalist composers and European classical music and which use drones, overtones and repeating patterns alongside a strong inclination for melody to create instrumental music that is both intelligent, hypnotic and emotionally charged.

His fingerpicking mantras are as melodic as a music box, gliding through dizzying tempos like clockwork… Such is the silky control he exherts over his instrument, Blackshaw often sounds more like a court harpist than a backwoods strummer. Whereas kindred spirits like John Fahey and Robbie Basho looked East for their Raga-inspired guitar diversions, Blackshaw instead sounds more East-Coast: his long-distance guitar tunes recalling NY minimalism, or Sonic Youth, as arranged for chamber orchestra. Mesmerising stuff, and proof that less is often more.

Goesting-Jockey Jean Klare
If you do not only want to treat your ears to a feast, but also want to have your culinairy senses stroked, please join us for a meal! Amateur-caterer and ‘goesting-jockey’ Jean Klare prepares extatic pleasure for the taste buds this evening; a three course diner, including an excellent wine selection, for only 25 euro. You do however need to make a reservation for this culinairy treat. Just send an email to harco@escrec.com.