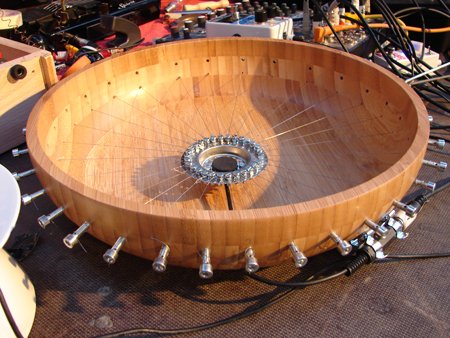 The artist-in-residence period of Eli Gras in De Perifeer is over. She worked here for three days, creating a new instrument from scratch. Really quite impressive! The residency was concluded with an ACSH concert in De Perifeer, where she played her new instrument and named it ‘Floating Bridge Round Harp’ aka ‘The Egg’. Check lots more photos overhere.

But although Eli Gras has moved on to her next gig by now, this project isn’t finished just yet… After creating and playing the instrument, we’re now moving on to phase three. When she’s back in Barcelona, she will start editing and modifying the recordings of her concert, because the instrument she built is also going to double as the packaging of a 12″ vinyl record release. This very exclusive sound object is to be released on Esc.rec. in 2016, as part of the Sediment series, in an edition of only one.

A true delight for all drone heads