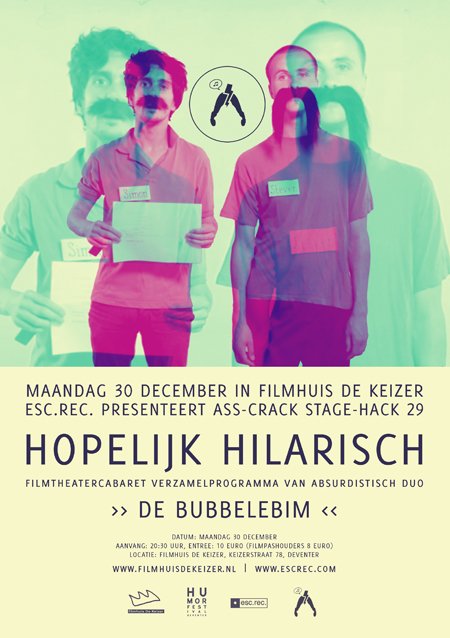 On December 30, Esc.rec. presents the 29th edition of the Ass-crack Stage-hack (ACSH) in Filmhuis De Keizer.

As part of the Humorfestival 2013, Esc.rec. invited De  Bubbelebim. De Bubbelebim is an absurdist (anti) literary performance stage theater viduo from Rotterdam. Professius T. Taal and Sim Sala Bubbelebim write stories and poems, do performances and the last few years they especially make comical video work. The films of De Bubbelebim usually derail, are often a commentary on the film medium itself, are full of language virtuosity and are characterized by a great do-it-yourself mentality.

In ‘Hopelijk Hilarisch’ (Hopefully Hilarious) De Bubbelebim presents a collection of absurdist comedy movie theater cabaret in a hopefully hilarious way! With a.o. the making of an idea for a film, a proposal for a performance, jamming doors and a clear explanation of the incomprehensible, De Bubbelebim shows us a keen selection of their rich oeuvre.