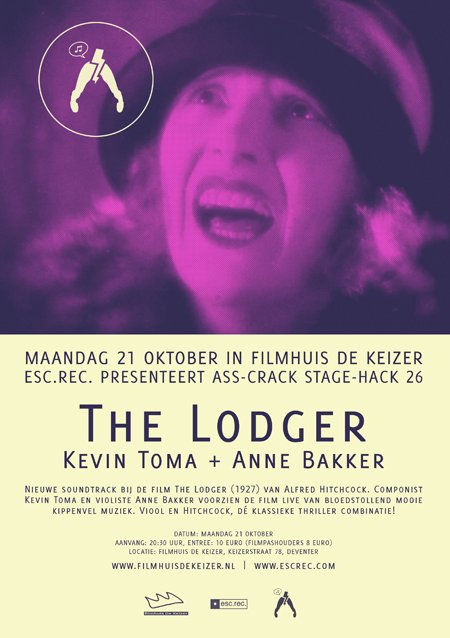 In The Lodger, loosely based on the story of Jack the Ripper, a workers family is faced with a very creepy and potentially dangerous tenant. Is he the man who stabs young blond ladies every Tuesday? And what to do when the daughter of the house falls in love with him?

The Lodger (1927) has a leading roll for the then very popular actor Ivor Novello, but now mostly speaks to the imagination as one of Hitchcock’s first films. A must-see! Composer Kevin Toma and violinist Anne Bakker provide this movie with a new, live and chillingly beautiful soundtrack. With samples, soundscapes and strange sounds Toma and Bakker emphasize the atmosphere of doom. Violin and Hitchcock… a classic thriller combination!

Kevin Toma is a long standing creator of fresh, innovative and accessible scores for silent films. He is also a film critic for De Volkskrant and De Gelderlander.

Anne Bakker plays the violin in many different ensembles and projects. She tours with the trio of former Iron Maiden vocalist Blaze Bayley and plays Turkish oriented music with the Göksel Yilmaz Ensemble, just to name a few… She is also working on a solo project in which she sings and plays the viola simultaneously.

— The Quietus
Scroll Up