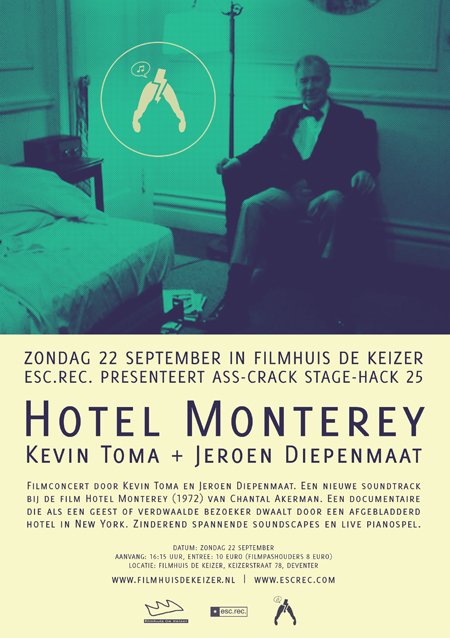 On September 22, Esc.rec. presents the 25th edition of the Ass-crack Stage-hack (ACSH). This is also the first edition taking place in Filmhuis De Keizer. And it is certainly not the last, because three more editions in Filmhuis De Keizer are already planned for the remainder of 2013.

Kevin Toma and Jeroen Diepenmaat created a new, exciting but modest soundtrack for Chantal Akerman‘s Hotel Monterey (1972). An experimental, silent documentary that wanders through a rundown hotel in New York like a ghost or stray visitor. Occasionally a guest appears in front of the camera or we see men and women, motionless in their dim suite. Mainly because of the long wanderings through the corridors, doors that secretly open, light that shines through keyholes and empty elevators, the film breathes a melancholy, ghostly atmosphere. Swayed by that atmosphere, Toma and Diepenmaat create thrilling soundscapes and play live piano, making Hotel Monterey a place where time petrifies and the spectator may never want to leave.

Kevin Toma is a long standing creator of fresh, innovative and accessible scores for silent films. He is also a film critic for De Volkskrant and De Gelderlander.

Jeroen Diepenmaat is a visual artist with a passion for sound. In his sculptures, installations and performances, he explores in a playful and analogue manner the relationship between sound and image.