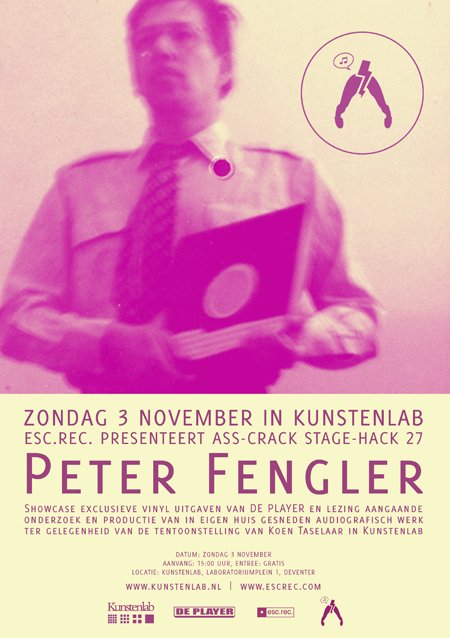 The 27th edition of Ass-crack Stage-hack (ACSH) is also the first edition in Kunstenlab. Loyal ACSH visitors might recognize Peter Fengler as a member of Coolhaven, the collective that presented us with some extraordinary radio plays in earlier editions. But this time he’s in Deventer for something else …

On the occasion of the exhibition of Koen Taselaar in Kunstenlab, Peter Fengler showcases exclusive vinyl releases of THE PLAYER combined with a lecture on research and (re)production of in-house cut audiographics.

Koen Taselaar is known for his drawings of album covers of non existing bands. Mostly in black/white with strong graphic shapes. Especially for Kunstenlab Koen Taselaar builds an installation, entitled A Lemon Looking For A Gin.

Peter Fengler is co-founder of THE PLAYER and visual artist, performer, musician and organizer. He exhibits at home and abroad with objects, installations, printing, sound works, plays and performances, international acts in clubs, at festivals, in museums and galleries and is a musician/performer in companies such as Coolhaven and Poolmongool. Peter Fengler releases his own (in-house cut) vinyl releases on the Ultra Hobby Complex (UHC) label.

THE PLAYER is a flexible platform in Rotterdam whose activities take place at the intersection of performative art, experimental music and visual arts. In addition to live performances THE PLAYER also produces vinyl oriented sound recordings in limited editions. The interdisciplinarity, graphic packaging and position of sound and sound carrier (vinyl) as a medium in art and experimental sound, are essential.

In terms of materiality records are complex graphic objects. Cutting a record is literally graphic. You take something away, creating a groove that forms a (sound) image. This process is not reserved for high fidelity only. The medium (the record) offers endless possibilities to ‘cut’ the sound, to apply generation loss, to deform it more or less, to generate sound by digging in the material. The record is not necessarily a carrier that must represent an original; it is sound in itself, an instrument. Fengler is on a quest for sound that represents itself.