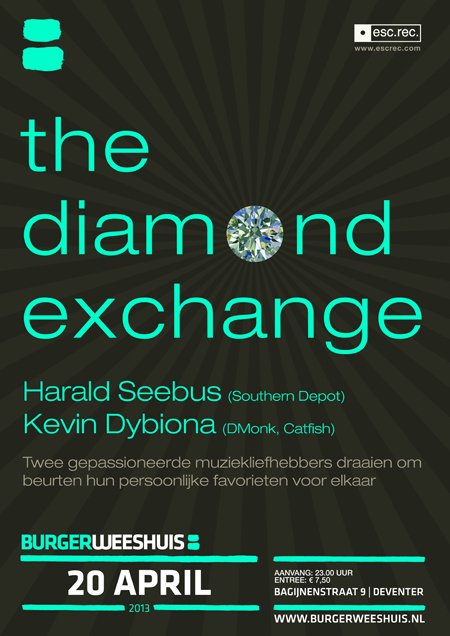 Esc.rec. presents The Diamond Exchange. Two passionate music fans take turns in playing their personal favorites for each other, in front of an audience. Participants are selected to ensure a certain level of musical compatibility and to stimulate chemistry, which can be equally interesting for the participants and the audience. At best, you witness an exciting, musical conversation between two connoisseurs. Depending on the selected participants, that conversation may trigger an audience to listen, dance, or both. No limits, anything goes.

Harald is known as Southern Depot in the electronic (dance) scene: bass music, electro(nica) and ambient, but there is much more to be found in his music storage. What to think of shelves full of jazz, hip-hop, drum’n’bass, house, pop, rock, jazz, skate punk and classical music? And that’s not even everything… Kevin is a sonic explorer since the 80’s. A former Drum ‘n’ Bass DJ under the DMonk moniker, and other styles under the name Catfish. Kevin is now no longer active as a DJ, but that has not hampered his search for breaks and beats at all. Expect the unexpected as he takes us on a tour through his extensive record collection. Both music lovers are open to almost anything and they’ll prove this during The Diamond Exchange.

You have to pay 7,50 euro to get in, but then you also get to enjoy the 7,5 year anniversary of Deventer Dub Sessions with Hunee & Antal.