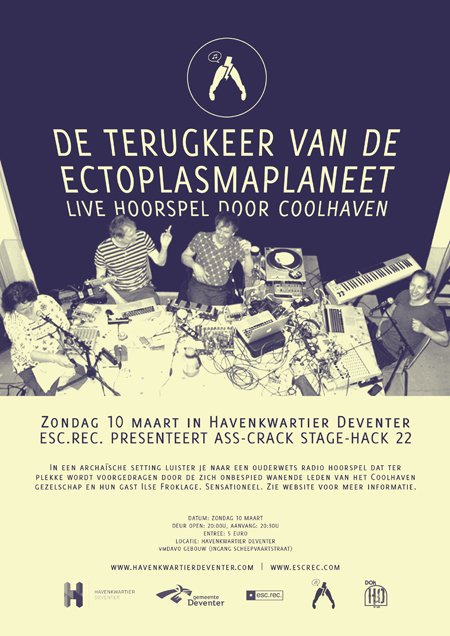 In this 22nd edition of ass-crack stage-hack you can listen to the old fashioned radio play ‘De terugkeer van de Ectoplasmaplaneet’ in an archaic setting, performed live by Coolhaven and their guest Ilse Froklage.

The bizarro* radio play ‘De terugkeer van de Ectoplasmaplaneet’ is the second part in a trilogy. The first part ‘De Planeet van de Oeroude Kinderen’ was played at ACSH#17. The people who attended the first part were blown away and specifically requested to also book the other two parts when they came out. So here’s part two! Also suited for people who haven’t seen part 1 of course!

Coolhaven is a flexible group that flows in a realistic-kapitalistic way where it is needed and dries up where moisture is unnecessary. Since about 1999, Coolhaven is active in all directions: performances, movies, rock music, radio plays, theater and very dry, hermetic art. Anything goes. Coolhaven consists of Hajo Doorn, Peter Fengler and Lukas Simonis.

* Bizarro is a literary (non) genre that has strict rules. 1) At the base should be a cheap tasteless idea, something that you think in the pub after the twelfth round, that gets meticulously & intrinsically elaborated on. But beware, the bad taste in it must be really good bad taste. 2) It’s good bad taste to give Satan, the Nazis or Saddam Hussein a cameo (or key roll).  3) Names of the main characters, situations and overall inspiration come from a balanced menu of high and low culture.  4) The universe is as unstable as the medium.  5) At the end of the story the world ends, or even better, the universe.

This ass-crack stage-hack is realized with financial contributions by the City of Deventer and Esc.rec. and is kindly hosted by DokH2o, who is currently temporarily using the venue.