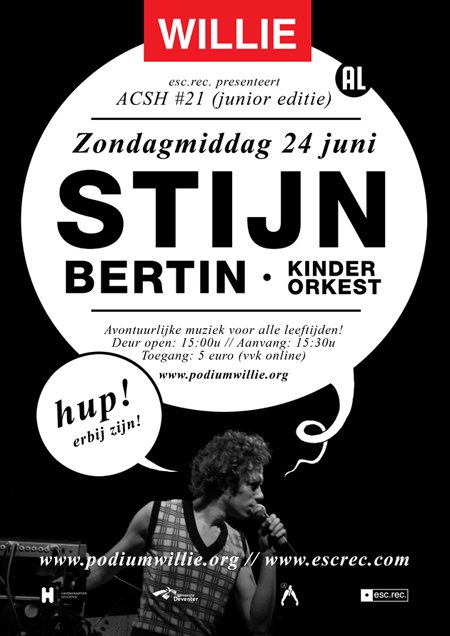 After a very successful first junior edition of ass-crack stage-hack last year, esc.rec. finally organizes the second junior edition of this adventurous concert seriess. Suitable for children (of all ages) ánd adults alike. The perfect counterpart to the K3 formula.

Stijn
Stijn, the popular Belgian electro-funk producer, comes with an impeccable live reputation. He has played at many minor and mayor festivals and venues by now. But Stijn was never in Deventer before! With his infectious enthusiasm he gets any room to sing along in three different languages on a sweat saturated dancefloor. Stijn has that Prince Sign O’ The Times style going on: danceable pop songs with a drum machine as a base, a grooving bassline and vintage synthesizers. The voice of Stijn has soul. And together with the virtuoso drum machines and synths he gets hands and feet together with ease.

As Stijn can also be found in the ranks of Kapitein Winokio, the Flemish Robin Hood of children’s music, we dared to ask him for this junior edition of ass-crack stage-hack. We are delighted that he has prepared a unique solo performance, especially for this show in Deventer! Do not miss this!

Bertin
Bertin van Vliet graduated from art academy with pop-art paintings and unrecognizable portraits of famous actors. Today Bertin mainly composes songs and does solo performances with his electronic improvisation music. Inspired by artists like Ween, Beck, John Frusciante, Bertin began recording his own lo-fi albums. With the advent of a four-track recorder, a digital minidisc recorder and eventually the computer, things got slightly out of hand. Bertin produced numerous tapes and CDR albums, released on numerous labels or in-house. As a lo-fi artist Bertin can be categorized somewhere between experimental electronic music and tasty pop songs. For this live performance he is going to improvise with Casio keyboards.

Earlier this day Bertin will also give a Casiophonic workshop for young and old (10 years and older).

Children’s orchestra
We start this special ass-crack stage-hack at 15:30 hrs. with a series of short performances (2 minutes max.) by a number of orchestra’s formed by primary school pupils from the Sine Limite verrijkingsgroep. These performances are the result of ‘Muziek raken’, a project developed for these pupils by Marloes Bloemenkamp and myself.

This junior edition of ass-crack stage-hack is financially supported by the municipality of Deventer.