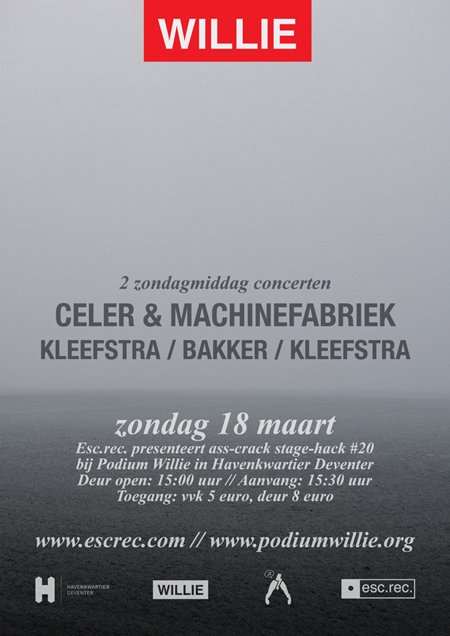 Celer used to be a married duo, Will Long and Danielle Baquet-Long (Chubby Wolf). Celer self-released numerous handmade objects, made sound for installations and exhibitions, and released work on independent labels in the U.S., Japan and Europe. Unfortunately Danielle Baquet-Long passed away in 2009. Celer has since been continued by Will Long, who currently lives and works in Tokyo. The intent is producing works that reflect the sincere nature and importance of love, the impermanence of life, and the spirit of togetherness, through a relative and absolute symposium of expression.

In this concert Celer collaborates with Machinefabriek. Rutger Zuydervelt started working as Machinefabriek in 2004. Except for a few piano and guitar lessons when he was young, Rutger didn’t study music. Instead, he graduated as a graphic designer. The sleeves of his releases are practically always designed by Rutger himself, which is a crucial part of the music. Machinefabriek’s music combines elements of ambient, modern classical, minimalism, drone and field recordings. His pieces unfold as ‘films without image’, with a sharp ear for detail.

Machinefabriek has an excellent live reputation and performed once before at an earlier ass-crack stage-hack. That was a very impressive concert and this collaboration with Celer promises nothing less.

Jan and Romke Kleefstra performed at earlier ass-crack stage-hacks too. But never before incombination with Anne Chris Bakker.

Jan and Romke Kleefstra mix poetry, music and video in a spatial and melancholic manner which originated in the empty menless landscape of Friesland. The fragments tell about the sensory experience of living in the land between the lakes and nearby sea. The music always arises ‘instantly’ during free improvisations. Several albums have been published of the collaborations of Jan and Romke. Those albums are all accompanied by a booklet with the poems in original Frisian and English translation.

With guitarist Anne Chris Bakker they soon release the LP “Griis” on the English Low Point, a comprised version of the music they played during their tour in Tokyo, Japan in 2010.

… music for nondescript, almost desolate places – soundtracks for the lives of the few revellers in the land of technicolor skies and distant, dusty horizons