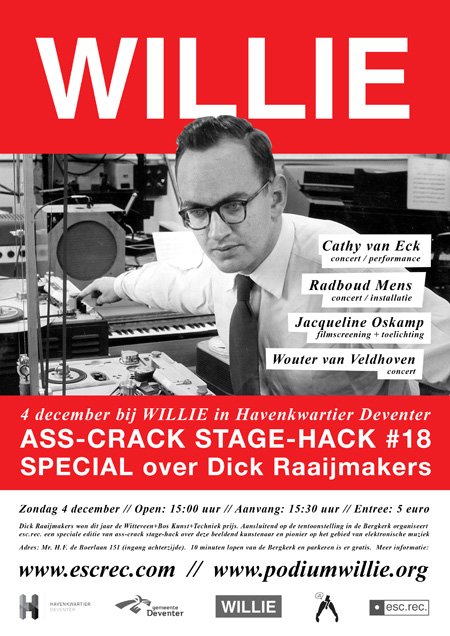 Like said before, composer and theatre maker Dick Raaijmakers is to receive the Witteveen+Bos Art+Technology Award 2011 for his entire oeuvre. The award ceremony takes place in the Bergkerk Church in Deventer on 10 November 2011, and will be celebrated with a Raaijmakers exhibition which will run until 4 December 2011.

On the last day of this exhibition, esc.rec. organizes a special 18th edition of ass-crack stage-hack with a complementary program about Dick Raaijmakers at WILLIE in Havenkwartier Deventer. You can attend this program after your visit to the exhibition in the Bergkerk Church; WILLIE opens at 15:00 hrs.

Starting at 15:30 with a screening of the film ‘Op zoek naar een vergeten toepassing – A portrait of Dick Raaijmakers by Jacqueline Oskamp‘. Jacqueline Oskamp is also the author of the book ‘Onder Stroom’, in which she vividly describes the history of Dutch electronic music. She is present at the screening, tells us more about Dick Raaijmakers and answers questions if needed.

After you’ve enjoyed a good meal at WILLIE, the program continues with three concerts/performances/installations which have an obvious relation to the work of Dick Raaijmakers. Performing artists are Cathy van Eck, Radboud Mens and Wouter van Veldhoven.

Cathy van Eck is a composer and sound artist. Her work includes compositions for instruments and live-electronics, as well as performances with sound objects, which she often designs herself. She studied composition and electronic music at the Royal Conservatory in The Hague and at the University of the Arts in Berlin. She performs her works regularly during festivals like Gaudeamus Festival in Amsterdam, TRANSIT in Leuven, NYCEMF in New York, SPARK Festival in Minneapolis, Klangwerkstatt in Berlin, Performance Festival Der Längste Tag in Zurich, Hapzura Digital Art in Israel, Avantgarde Schwaz in Austria and Spaziomusica in Italy. She is currently doing a doctoral degree at the Orpheusinstitute in Ghent and University of Leiden in the DocARTES Program, her dissertation subject is Loudspeakers and Microphones as Musical Instruments. Since March 2007 she has a teaching position at the department for music and media arts of the University of the Arts in Bern, Switzerland.

Cathy van Eck is going to perform ‘Song No 3’ for us. Extensive documentation of ‘Song No 3’ can be found here.

Radboud Mens has been a sound-artist since the mid-eighties and is now living & working in Rotterdam. In 1988 he started creating audio-installations and noise-machines. As Hyware and Technoise he has done numerous noise-performances, standing-wave performances and concerts. Since 1997 he also started making music using his own name and has released a lot of vinyl and CD albums on many different labels like Staalplaat, Mutek and Touch. On labels like Audio-NL and Vynalogica he did a series of minimal-techno 12 inches. Together with Dan Armstrong he is the founder of the ERS label. He also was a dj for the Amsterdam free radio station Radio 100, where he did a show entitled “Earbitten”, for 16 years; between 1986 and 2003.

Radboud Mens will play one of his installations for us, in which he controls three guitars simultaneously by making them resonate to sinewaves from his computer.

Wouter van Veldhoven was a guest in one of the previous ass-crack stage-hacks, some years back. Using reel-to-reel tape recorders, home-build music machines, cassette walkmans and toy instruments he creates musical oddities. Meticulously detailed sounds and simple, but beautiful melodies. Currently he’s building new instruments from second hand junk (like a prepared toy piano, modified taperecorders, automated violins and circuit-bend cassette walkmans). These instruments are gradually showcased in his new performances… He has released his music through Staalplaat, Digitalis and Eat This Media and frequently collaborates with the likes of Greg Haines and Machinefabriek.

All in all this is an extremely impressive line-up in my opinion! And a well deserved tribute to Dick Raaijmakers, especially when consumed together with the Raaijmakers exhibition in the Bergkerk. A day equally interesting for Dick Raaijmakers experts ánd for people who are not yet familiar with his inspiring work and the impact it had and still has on other artists and electronic music in general.

Havenkwartier Deventer is a 10 minute walk from the Bergkerk Church and parking is free.

This ass-crack stage-hack is realized with financial contributions by the City of Deventer, Foundation Havenkwartier and Esc.rec.

One thought on “December 4, 2011: ACSH #18 Special edition about Dick Raaijmakers”

— The Quietus
Scroll Up