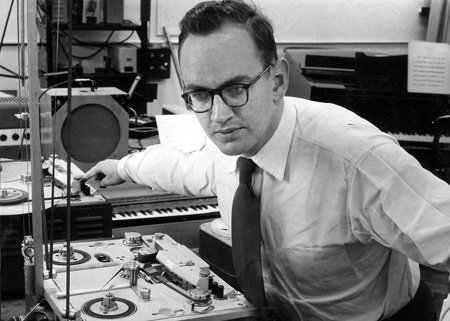 Composer and theatre maker Dick Raaijmakers is to receive the Witteveen+Bos Art+Technology Award 2011 for his entire oeuvre. The award ceremony will take place in the Bergkerk Church in Deventer on 10 November 2011, and will be celebrated with a Raaijmakers exhibition which will run until 4 December 2011.

The Witteveen+Bos Art+Technology Award is now in its tenth year, and the independent jury has chosen to mark this occasion by awarding the prize to Dick Raaijmakers. ‘We would like to take this opportunity to honour a very remarkable artist who is no longer a promising young man, but whose work continues to be promising,’ the jury stated in their report. ‘The great thing about Dick Raaijmakers is that he always retained his pioneering spirit and did not seem to know any bounds. Music, visual arts, theatre, poetry – he incorporated them all into one all-encompassing art form. He was a master of all arts, yet he never lost his own uniquely individual touch. Raaijmakers’ work possesses a certain sprezzatura. He is the rare artist who influences even laymen.’

Dick Raaijmakers (born 1930) is a Dutch composer, theatre maker and theoretician. He was one of the founders of Dutch electronic music in the 1950s and was a multimedia artist years ahead of his time. His works, installations and music and theatre performances were so original that they enjoy a worldwide reputation. His original ideas and novel approaches to art have inspired many, not in the least later generations of artists.

In the seventies Raaijmakers developed three ‘Ideofonen’, installations in which the speakers themselves create sound. Right now ‘Ideofoon 1’ is being reconstructed and is part of the exhibition Raaijmakers in the Bergkerk Church in Deventer!

On December 4, the last day of the Raaijmakers exhibition in the Bergkerk Church, esc.rec. organizes a special edition of ass-crack stage-hack at WILLIE in Havenkwartier Deventer to complement this exhibition.

More info about the impressive line-up of this complementary program very soon!

Vital to the wider ecoculture of the alternative music scene in the country and pathfinder for a wider European network of avant-garde and underground artists.

— Louder Than War
Scroll Up