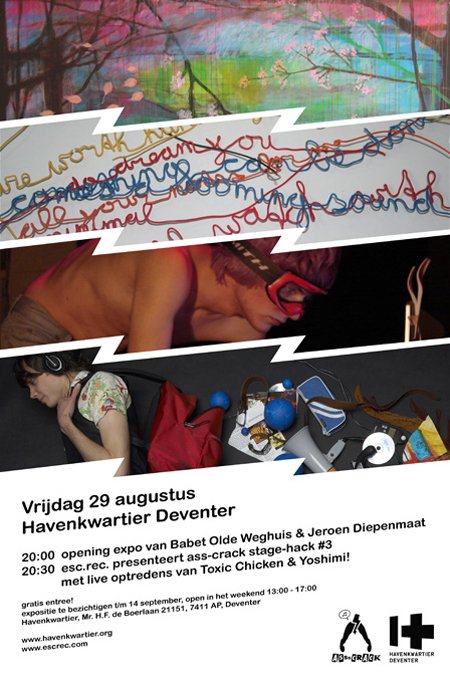 This third edition of ass-crack stage-hack coinsides with the opening of the expo by Babet Olde Weghuis and Jeroen Diepenmaat in Havenkwartier Deventer.

Yoshimi! released ‘II aka The Cheshire Rat‘ through esc.rec. last year and is finishing the work on his first album right now. He plays pleasantly rambling lofi popsongs, played with a broad variety of instruments, like the cello, conga, guitar, synth, bass, bongo, tarbuka, rababa, harmonium, trumpet, accordeon, drums, ukulele and -let’s not forget- his voice. Yoshimi! doesn’t hide the fact that his sound is greatly influenced by The Magnetic Fields. He performs live with the help of his brother, a drummer and sometimes his grandfather.

Ever since Toxic Chicken released his debut album through esc.rec. last year, his output seems unstoppable… Besides releasing another (free mp3) release through esc.rec. he also released several (free) albums through other labels. His bewildering songs, hectic beats and lofi punk noise eruptions often give a personal glance into the chaotic lifestyle of Toxic Chicken. Due to his unorthodox use of attributes and energetic performance spasms, his live performances are remarkable to say the least!

The cream of the crop in improvised music, electronic experiments, electro-acoustic research and sound art finds a warm and welcome home on the Esc.rec. roster