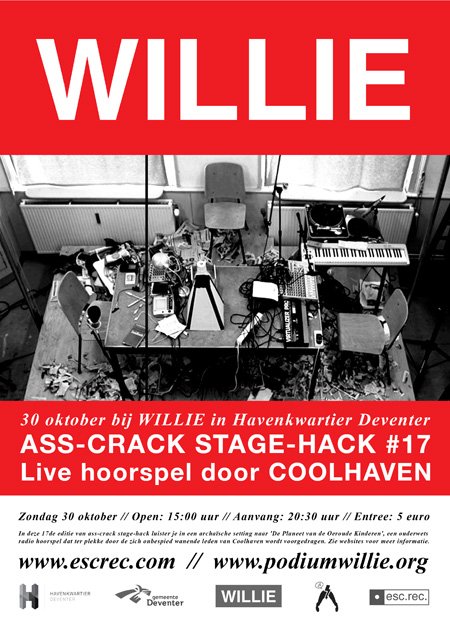 In this 17th edition of ass-crack stage-hack you can listen to the old fashioned radio play ‘De Planeet van de Oeroude Kinderen’ in an archaic setting, performed live by Coolhaven.

Coolhaven is a flexible group that flows in a realistic-kapitalistic way where it is needed and dries up where moisture is unnecessary. Since about 1999, Coolhaven is active in all directions: performances, movies, rock music, radio plays, theater and very dry, hermetic art. Anything goes. Coolhaven consists of Hajo Doorn, Peter Fengler and Lukas Simonis. Fortunately, they have something to say about themselves:

Hajo Doorn: “I myself love playing with attraction and repulsion. Trying to lure people in only to kick ‘m down later. That does not always work. Sometimes you notice that people are struggling. In our performances it’s all about confusing the audience so much, that at some point they can’t tell whether what we are doing is intended or not, or whether something is good or not. It requires a kind of virtuosity to give the public the idea that there is real craftsmanship in our actions, without being able to define exactly where. Every audience is looking for a satisfying moment. And we want them to be satisfied, but not in the way they know. We want to loosen them – yes, ambitious – and create a new framework. Within this new framework we feed them with good things or nothing at all.”

Peter Fengler: “The audience… there is a part that drops out and that is disappointing. But the part that isn’t deterred slowly enters another realm, where little guidance is offered. Some go home with a kind of doubt about whether that experience was something or nothing. The part that doesn’t care much for security is less troubled by this.”

Lukas Simonis: “An important feature is chaos, the refusal to reassure the customer, which we could if we wanted to. We provide no safety nets. We almost never make unstratified things. If you are experiencing a performance by Coolhaven you can be sure that there’s a tipping point in there somewhere.”

The bizarro radio play ‘De Planeet van de Oeroude Kinderen’ consists of three parts. Lyrically this play has some explicit content, which may not be entirely suitable for young children.

This ass-crack stage-hack is realized with financial contributions by the City of Deventer, Foundation Havenkwartier and Esc.rec.