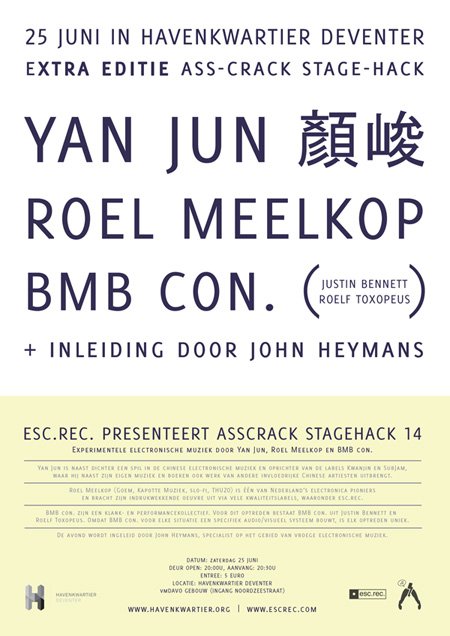 Opportunity knocked, so esc.rec. organizes/improvises this extra(!) ass-crack stage-hack in June. Yan Jun just so happens to be in The Netherlands (for Poetry International). Besides poetry he also makes music and – together with Roel Meelkop and BMB con. – he comes to Havenkwartier Deventer to perform for us on Saturday, June 25.

Yan Jun was born in Lanzhou in Northwest China and studied Chinese literature at the university there. Besides being a poet, he’s a hub in the Chinese electronic music scene and founder of the influential labels Kwanjin and SubJam, where he releases his own music and the work of other Chinese artists. He organizes musical events, gives concerts in China and abroad, and he writes critical essays on music.

Roel Meelkop is one of the Dutch pioneers of experimental electronics. He released his impressive oeuvre through many quality labels, esc.rec. included. Meelkop is also part of several groundbreaking groups such as GOEM, Kapotte Muziek, Zèbra and THU20, together with some other important players in Dutch experimental electronica, like Frans de Waard, Jos Smolders and Peter Duimelinks.

BMB con. are the most mysterious sound and performance collective to be found in The Netherlands. For this performance BMB con. is Justin Bennett and Roelf Toxopeus. A BMB con. performance consists for a large part of improvisation: action, re-action and interaction. Because BMB con. build up an audio/visual system especially for each space, each performance is unique. People from Deventer may have encountered Justin Bennett’s work in the recent exhibition ‘Sporen’ in Kunstenlab, Deventer.

UPDATE: It seems that Dennis de Bel has made a last minute surprise decision to tag along. So he might be present here too. Chech here for one of his latest works.