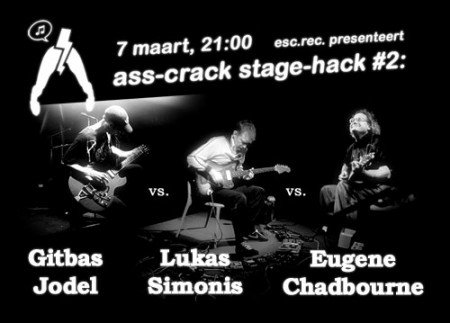 The second edition of ass-crack stage-hack consists of a duel/duet between three extraordinary guitarists. They will improvise several sessions in different collisions/collaborations.

Eugene Chadbourne (USA) is a composer, improviser, guitarist and banjoist with a impressing record of service. He collaborated with John Zorn, Fred Frith, Derek Bailey, Han Bennink, Jello Biafra, Zu and many others. Once starting out playing rock&roll, Dr. Chadbourne soon started studying other genres, like blues, country, bluegrass, free jazz and noise. He was influenced by the experimental output of Captain Beefheart and The Mothers of Invention early on. Eventually all these influences melted together in this unique Chadbourne style. Eugene Chadbourne is also known as inventor of the ‘electric rake’, an instrument made by attaching a microphone or guitar pick-up to an ordinary lawn rake.

Lukas Simonis (NL) performed at Havenkwartier Deventer twice before: solo and with the notorious formation Coolhaven. After having played in bands like Dull Schicksal, Trespassers W and Morzelpronk he began to focus more on improvisation, making use of all kinds of attributes, ranging from any kind of digital aids to archaic phone amplifiers and hairdryers. It crunches, squelches, squeeks, throbs, peeps, sucks, drills and drowns like no guitar ever sounded. Nowadays Simonis plays a.o. in Apricot My Lady (with Anne La Berge and the Bohman Brothers), Vril (with Bob Drake and Chris Cutler), Coolhaven, The Static Tics (with Henk Bakker) and Liana Flu Winks (with Wilf Plum and Nina Hitz).

Gitbas Jodel (NL), the emperor of the Tearloop a.k.a. the Fret dancer, also performed at Havenkwartier Deventer before: as the guitarplayer of De Bronstgieters, without a doubt the most peculiar band of rammelpoploving Holland. Besides De Bronstgieters, he also supplied the band Hanzasport with sublime guitarwork and subtle lyrics for quite a long time. For many years now this weird bird has been working in secret on perfecting his remarkable guitar technique, for which he once already won the title ‘Best Guitarist’ at the award ceremony of the Grote Prijs van Nederland.

Preceding this exciting spectacle you can enjoy a simple but nutricious meal in Havenkwartier Deventer. Don’t forget to make a reservation trough harco@escrec.com though! Dinner seats are limited.