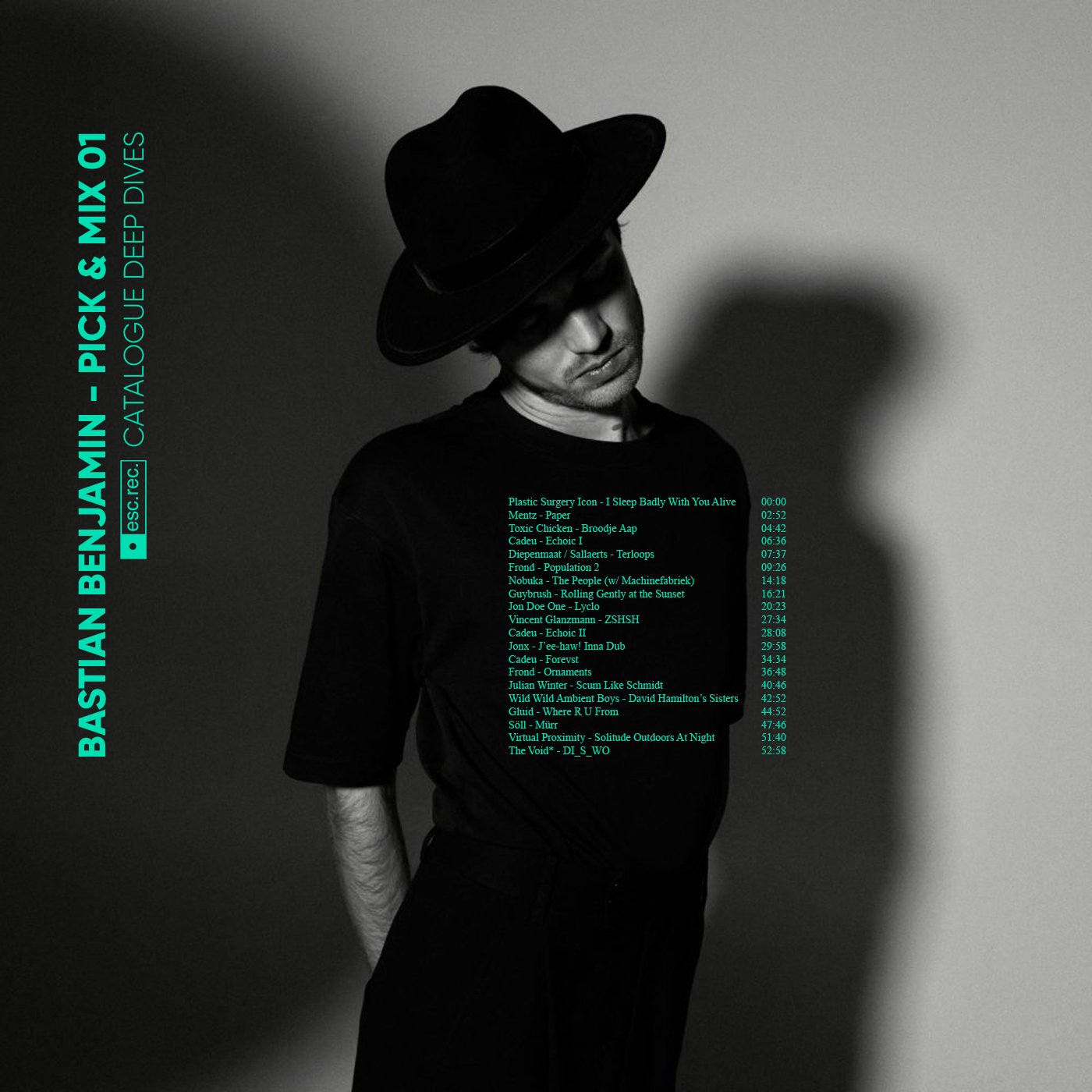 PICK & MIX is a series of Esc.rec. catalogue deep dives by DJ. This is the first result, carefully selected and constructed by Bastian Benjamin. Available as a (free) download/stream on Bandcamp. 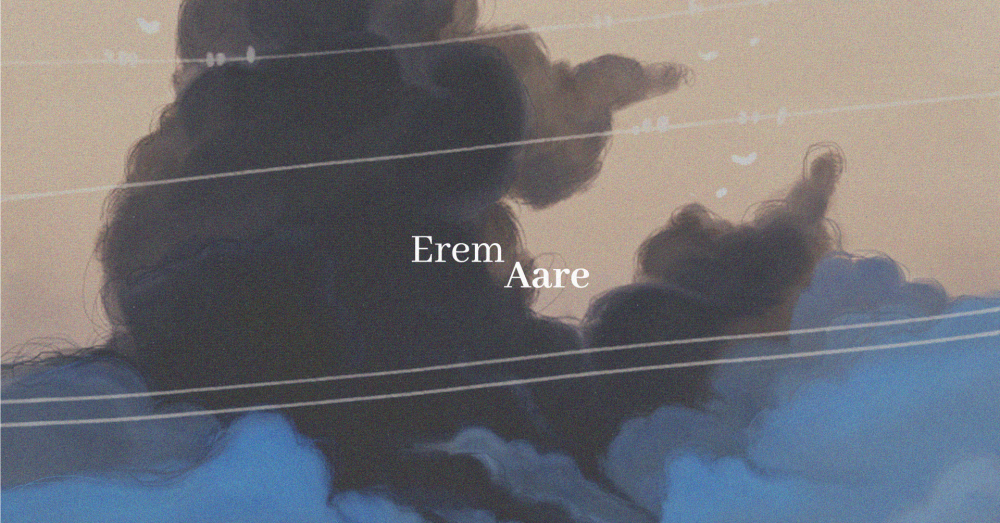 Erem is a musical trio created by Stan Maris (Kreis) and Nicolas Van Belle (Suura). The source of this project is a shared interest in sound and transformation. The two harmonic instruments (guitar and accordion) are joined by singer Mirte Leconte. The trio is best situated in an overlapping area of various musical domains such as jazz, improvisation, chamber music, folklore and choral works. From this they draw great inspiration for the performance of their personal sound spectrum. An important guideline for their music is the variation and alteration of consonant – dissonant, structure – texture, peace – movement. For this, the trio creates its own playing field of original compositions in which they involve the listener in a varying, colourful journey.

This wonderful debut album is available as a download + tote bag + postcard and on all streaming platforms. 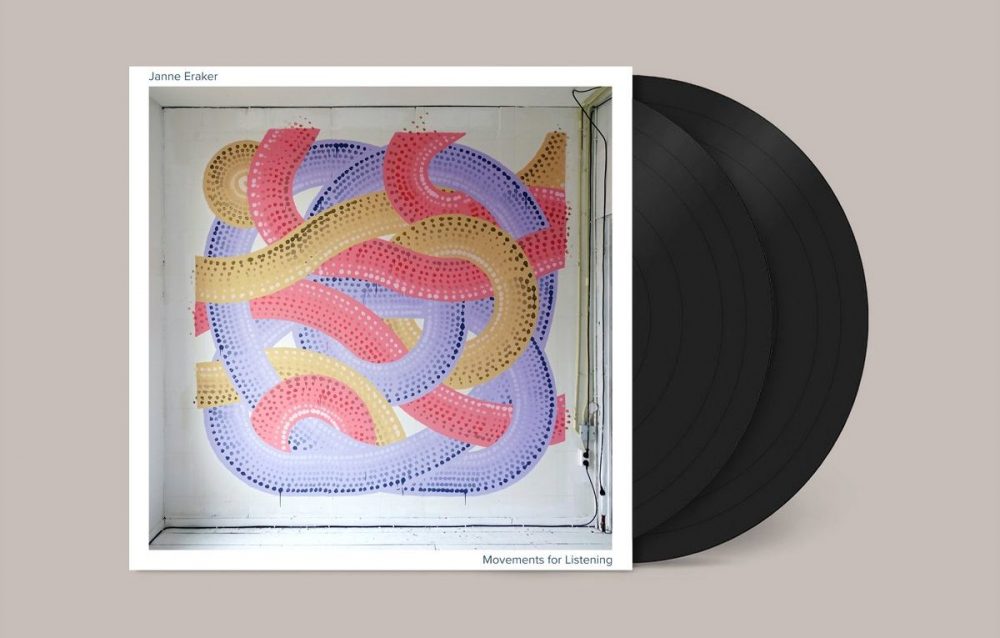 This groundbreaking tap dance album is a wild exploration of sound by Janne Eraker and friends, with borderless worlds of music, widening the horizon and moving outside of all boxes. The ambition of the project was to find ways to use tap dance as percussion in a variety of musical styles, genres and collaborations, and to make a state of the art album recording of this. Eraker has a group of stellar musicians with her on this project: Knut Reiersrud, Ivar Grydeland, Michaela Antalová, Harald Fetveit, Anders Kregnes Hansen, Hans Martin Rundberg Austestad, Juliana Venter, David Skinner, Roger Arntzen, Vegar Vårdal and Kristoffer Lislegaard. This resulted in 10 recordings with 9 duets and 1 trio.

All of this is also documented in a series of videos, to make it possible to see how the music was created. Together with the videos, the ten digital singles that make up the album will be released monthly; the first single came out on January 6th, the second single on February 3rd. The double vinyl record will be out at the end of all this, in fall 2023.

Daan Botlek is a visual artist from the Netherlands. He created the cover of the double vinyl record and the ten digital singles. These are all unique murals made in his atelier in Rotterdam, as a part of his artistic project called Primitive Practice.

Much more information, videos and an extensive blog about this project can be found at janneeraker.com.

On November 22, Esc.rec. releases three cassette tapes simultaneously, by Mikael Szafirowski, Giacomo Zanus and LAMIEE. You can also order them as a bundle with a discount. Find out more below. Thank you for reading and listening.

Ferric 90 is a product of Mikael Szafirowski’s experiments in sound synthesis and a search for the sort of narrative form that has been in the back of his head since he started to commit to being an improviser. Every time he was researching a synthesis technique, he would always be recording. This way Mikael could keep and share the initial excitement that he felt from the material and store it away until an opportune moment for telling his story. You may also know Mikael as (founding) member of Rooie Waas, Naked Wolf, Royal Improvisers Orchestra, Zugabe and Gajar Girl.

PATCHWORK is the concentration of many ideas in a small space. No dilation and the rejection of horizontal sound. The project originates from LAMIEE. but it takes shape around the idea of the imaginary collective Hystrix Kitsch, an extremely changeable and constantly mutating ensemble (in this case with Andrea Dellapiana, Edoardo Vogrig, Francesco Panconesi and Giacomo Mondino). A liquid form without gravity, but extremely dense. LAMIEE. is Nicholas Remondino, who you may also know as half of the electro-acoustic duo ?TONN.

GIACOMO ZANUS – INSIDE A FRAME

In his first solo album, the Italian composer and improviser Giacomo Zanus takes inspiration from the concept behind the last visual work of the Iranian filmmaker, poet and photographer Abbas Kiarostami to fix four imaginary landscapes -both composed and improvised- where the ongoing fluctuation of different layers and the constant renewal of new details marks the chain of events. Subtle, shifting textures, melancholic repetitions and field recordings define a palette of introspective climates that embrace an array of sounds from experimental music, to avant-folk and minimalism. 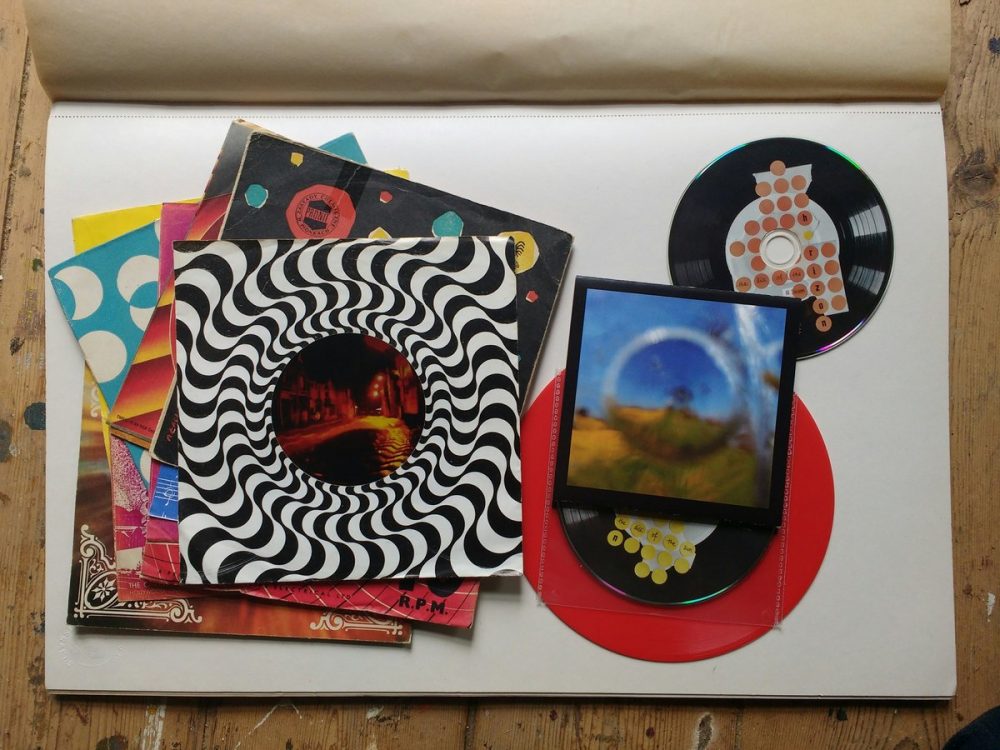 This brimful double-album by Horizon contains two long play CD’s: ‘the disc of the sun’ and ‘the disc of the moon’. Short and longer stories are told by acoustic instruments such as guitar, mandolin and melodica on a bed of field recordings or beats created with percussion, while voices and sounds from sampled vintage records add another layer. Some tracks make you want to move your body, others move you in different ways. Hop on a trip through time and space.

This album is released on September 29 as a limited edition double cd in handmade 7″ cover. The two CD’s slide into plastic folders attached to both sides of a vintage 7″ record. The package comes with two booklets and is served in different vintage 7″ paper sleeves. Every copy is unique. Only 100 copies available. This double album is also available as a Bandcamp exclusive download. 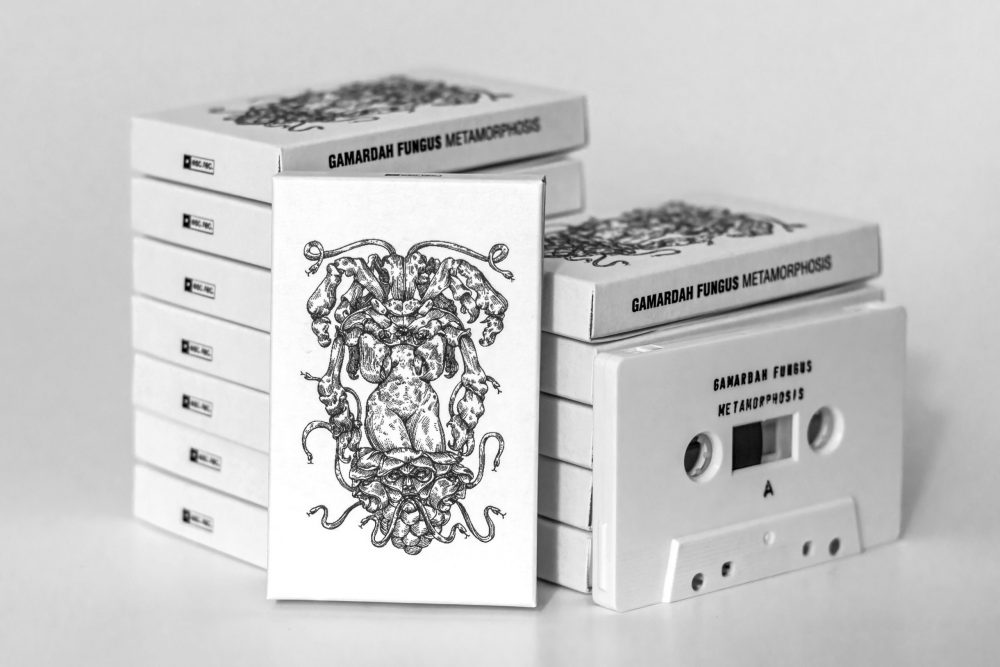 This album was supposed to come out in March 2022, but Ukrainian artists Gamardah Fungus obviously had other priorities at that time.

“This is probably our roughest album to date. It was recorded before the war in our country and seemed to foreshadow the mood that would be inherent in us in 2022.”

Gamardah Fungus is a band from Dnipro, Ukraine. They produce slow, viscous drone ambient, sometimes adjoining meditative electroacoustic and gloomy dark jazz with field recording. The album Metamorphosis was influenced by the Dao and Zen philosophy that Gamardah Fungus has been interested in for many years. The works of Heidegger, Sartre, Camus and Kafka also served as considerable inspiration.

This album is released on September 12 as a limited edition cassette in cardboard cover and a download/stream on all relevant platforms. All proceeds of this release go to the artists to help support their lives in Ukraine. Please feel free to pay more if you can. 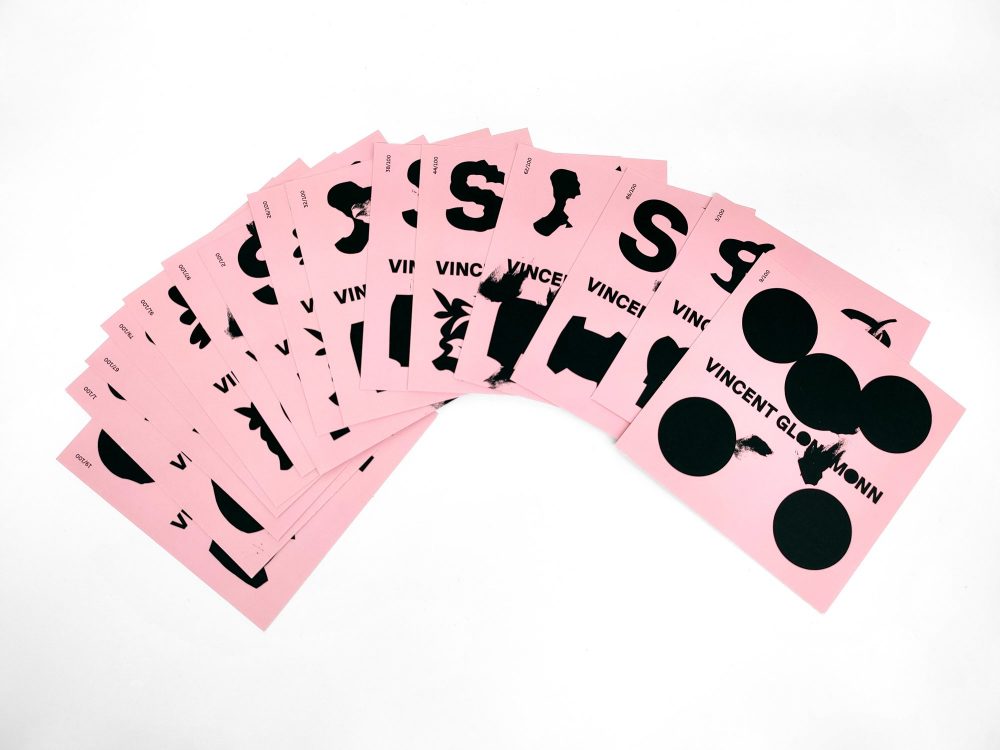 Vincent Glanzmann is a sound artist and drummer based in Zürich Switzerland. The open nature of his work as both a performer and composer has led him to a multitude of collaborations with a broad spectrum of artists within contemporary music, visual arts, dance, fashion and literature. Having been inspired by the artistic output of the dance choreographer Sasha Waltz from Berlin, Vincent created and produced SZSHH, his third solo percussion release as an homage to the artist. SZSHH could be thought of as an abstract form of dance music.

This album is released on September 2nd as a limited edition card (all individually designed!) and a download/stream on all relevant platforms.

Matter Affect is a copious compilation with work by all artists, performers and collaboration partners who have been confronted with COVID restrictions in the program of De Perifeer in recent years; shows that have been cancelled, moved (several times), took place in an adapted form or could not even be booked anymore.

De Perifeer asked everyone involved to reflect on this strange time period in their very own way. Allowing almost every conceivable shape or form; in audio, text, image or combinations thereof. The list of participants is surprisingly long, especially for a small venue like De Perifeer. But at the same time the relatively manageable scale of De Perifeer makes it possible to make an elaborate compilation like this, in which the personal impact of COVID is clearly felt and there’s room to show what is hidden behind numbers and graphs.

All submitted material is collected in an A4 box in an edition of 250. Matter Affect consists of substantively different entries from almost every conceivable art discipline. The whole thing is accompanied by a contextual booklet; basically a concise overview of events. Check the list of contents in the description on this page.

And then we’d almost forget that Matter Affect is also a very special release for another reason entirely; it’s the 100th release on the Esc.rec. label!

This album is released on July 18th in physical form with a download/stream, exclusively on Bandcamp.

Lovingly presented (as most of the releases by Esc.rec. are, of course) in an unusual way